For us it is time to rebuild the Union!

We have a duty to share our European dream with our fellow citizens, sharing values of respect for human dignity, the rule of law, freedom, equality, solidarity and responsibility.

It is time for Democrats to take the lead.

The future of Europe: a summary of our conference on the 70th anniversary of the Schuman Declaration

A few months after the 70th anniversary of the Schuman Declaration due to the current pandemic, a conference on the future of Europe was organized on the 30th of September.

A European Union that protects

In this convulsive social context defined by distrust of traditional institutions, the feeling of lack of control of the situation and vulnerability, people require that Institutions and Governments offer them security and protection to allay their fears.

In this context of uncertainties and insecurities a closer Europe to its citizens mustre-emerge empathetically to the people´s worries, needs and aspirations.

We should promote the Europe guarantor of security that offers and implements effective responses to problems and wins the support of the public by its legitimization.

The concept of Sovereignty in modern times

The concept of absolute sovereignty in an interdependent world is anachronistic and is an idea linked to Intergovernmentalism, which would relate to the rule of unanimity. It is not longer useful to make progress towards European integration because it implies the right to veto. The qualified majority should replace the unanimity.

The Covid-19 and the lessons learned

The European strategic autonomy demands the production of indispensable medical supplies and the diversification of the production chains, without depending on a single source of supply, to avoid threats of shortages.

In this way we welcome the initiative of building a stronger European Health Union to enhance Europe´s capacity to respond to future threats, expressed by the President of the European Commission. European sovereignty, in a world of free and social market economy, requires us to relocate future industries linked, essentially, to health, green energy and digitization and eliminate excessive dependencies on the so-called world factory.

These funds represent a historic milestone due to the enormous solidarity shown by the richest European countries and the recourse,for the first time, to the borrowing of the European Commission to finance the relaunch of our struggling economies.

The value of this extraordinary solidarity fund, which still has to overcome several obstacles for its final approval, is a great opportunity for the modernization of our economies.The rational and effective implementation of this Plan has also decisive political connotations for the future of the EU. We have to take proactive steps to make sure the money goes where it’s intended so that the recovery fund can meet its goals.

If the great bet of the Next-Generation program is successful, we would have taken a great leap not only in the modernizing dimension of the economic-industrial system but also in the generation of trust, between countries and citizens, to move inexorably towards the much desired Economic and European Union.

Conference on the Future of Europe

The Conference on the Future of Europe is a great opportunity, materialized in a future Treaty, to transform the EU and respond to the challenges of our time, based on the perennial values that founded the creation of the European Community.

The removal of unanimity, the transnational lists for  European elections, the establishment of European Union own resources, convergences in European Foreign and Security policies, …. are some of the matters that will be raised in this Conference in order to make progress in our unity as Europeans. In this discussion about the future of Europe we will meet with great difficulties and in some countries state-nation inertia will put the brake to advance in political Europe but we must propose inclusive formulas of integration, including different speeds or a Europe of concentric circles, to configure a cohesive political community.

Europe, although very fragile in demographic terms and therefore with a declining weight in the world context, is still the most successful example, imperfect like all human tasks, of freedom, democracy and social justice, in the whole world.

However, in these turbulent times we cannot ignore the existing risk of fragmentation of the EU that could lead us to demolish this unprecedented human construction that has contributed in a crucial way to the peace and prosperity of our continent.

Therefore, we should confront the destructive forces that stimulate sectarianism, polarization, divisionism, and unilateralism. Instead, Europe must be at the forefront of promoting the spirit of agreement between different and adversaries, the search for the common good, multidimensional cooperation and multilateralism.

Let us seize the opportunity that this systemic crisis, which entails new challenges, offers us to transform and strengthen our European Union, based on our perennial European founding values.

Pictures of the event: 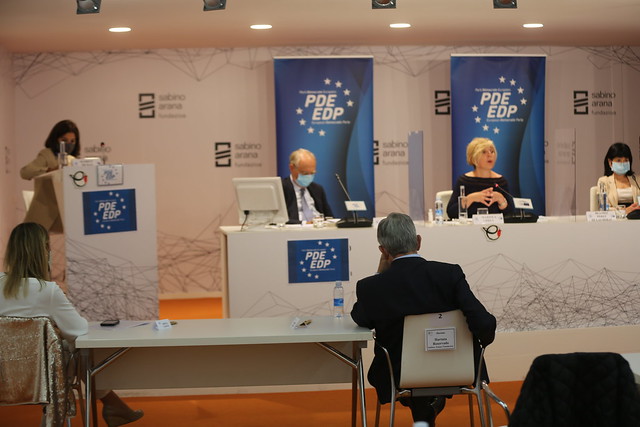 END_OF_DOCUMENT_TOKEN_TO_BE_REPLACED

The European Union must increasingly involve citizens in its deliberations and take their views into account. We defend the idea of more representative and therefore stronger institutions.

END_OF_DOCUMENT_TOKEN_TO_BE_REPLACED

"The democratic idea and the future of Europe": EDP Council – Rome, December 8th 2017

END_OF_DOCUMENT_TOKEN_TO_BE_REPLACED

Europe - connected to its regions by shared challenges