German citizens share their ideas on the future of Europe

Some 100 people from various German regions took part in September in a two-day European Democratic Party-hosted "Zukunftsmacher Europa" in Frankfurt.

Held on 8 and 9 September, members from Freie Wähler Bundesvereinigung, an EDP member party from Germany were invited by the European Democrats to exchange ideas on topics such as climate protection, digitisation and inflation. The EDP invited young people, students, working-age adults, and pensioners to take part. It was chance to listen to attendees aged 16 to 81 share what they want from government both now and in the future.

EDP European Parliamentarian Engin Eroglu ( Freie Wähler, Germany) welcomed the group, stressing that Europe is “more and more seen as part of the solution and not part of the problem". He especially noted how the EU fights for human rights, an area Eroglu activity works on in the European Parliament. He commented: “Every fight for human rights is a fight for democracy."

EDP Secretary General Sandro Gozi gave a welcoming address, echoed Eroglu’s message on European democracy: "In Europe, the EDP is first and foremost a community of citizens that vote together, that share a destiny, that share an interest, that share values." He added: "For us as the European Democratic Party, the issue of defence, security and power in Europe goes hand in hand with the issue of strengthening democracy at European level... "Being a European Democrat means that we are ready to fight for democracy beyond the European Union level, also globally."

Gozi added: “In Europe, the European Democrats are first and foremost a community of citizens who vote together, who share a destiny, who share an interest, who share values…For us as the EDP, the issue of defence, security, and the power of Europe goes hand in hand with the issue of getting stronger democracy at European level."

Also speaking at the event was Frédéric Petit, EDP Deputy Secretary-General and French MP, who called for a European citizenry: "A Europe of citizens is needed and forms a highly important element to solve conflicts in Europe."

Joining him was Tobias Gotthardt, Chairman of the European affairs Committee of the Bavarian State Parliament (Freie Wähler) as well as a member of the European Committee the Regions (Renew Europe group). Commenting on discussion sessions, he noted: "What I experienced today is some 100 people showing what they want and what we can do if we sit together and take the time to get to know each other. He added: “In the different sessions we realized the seriousness and honesty of Europe."

On EU policymaking and democracy, Gotthardt concluded: "What is decided in Brussels was decided upon by the national governments in the Council and what the national voters in parliament discussed. We do it all together."

The event in Germany was the second outreach event during September convened by the European Democratic Party. Later in the month, EDP hosted its annual ‘Europe Days’ in Guidel, France, alongside ”L’université de rentrée”, an annual event convened by Mouvement Démocrate – the EDP member party in France. The EU policy-focused event included 10 high-impact workshops and two plenary sessions.

Events in both France and Germany provide examples of EDP's people-focused outreach and policy formation.. 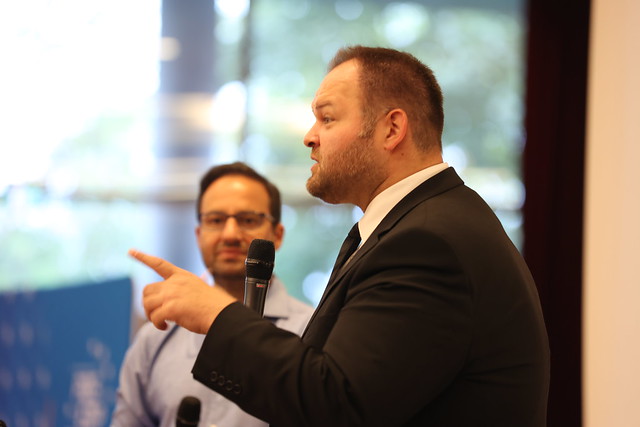 Sandro Gozi: "EPP with ECR? Without us, Without Renew/EDP".

Launch of the Democratic Mayors' Network in Rome